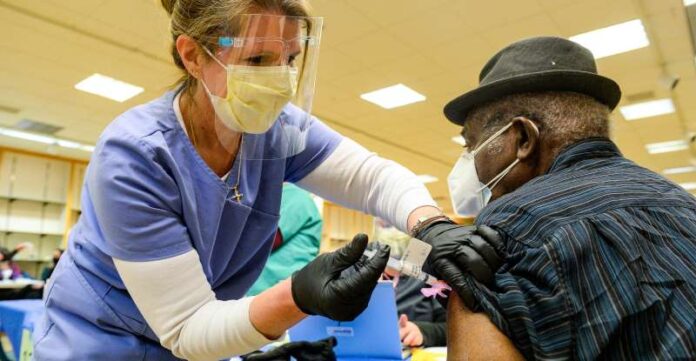 COVID-19 infection and hospitalization rates are falling nationwide, but experts talk in dire terms about what will happen if variants of the virus are allowed to surge this spring.

“I’m very worried we’re letting our foot off the brakes,” said Atul Gawande, a surgeon at Brigham and Women’s Hospital and a professor at the Harvard T.H. Chan School of Public Health.

The U.S. saw a spike in cases last spring, mainly in the Northeast, last summer in the South, and November through January pretty much everywhere. As the nation’s death toll from COVID-19 approaches half a million people, public health experts said they dread the possibility of a fourth wave.

“We are done with it, but it is not done with us,” added Dr. Luciana Borio, former acting chief scientist of the Food and Drug Administration.

“It’s like we’re trying our best to help the virus rather than stopping it,” said Theodora Hatziioannou, a virologist and research associate professor at the Rockefeller University in New York City.

More contagious variants of the virus have raced across Europe, South Africa and Latin America. They have all arrived in the U.S., and one first identified in the United Kingdom is likely to be dominant here by the end of next month, according to the U.S. Centers for Disease Control and Prevention.

Dr. Peter Hotez, dean for the National School of Tropical Medicine at Baylor College of Medicine in Houston, said that if the infectiousness and case fatality rate for the variant known as B.1.1.7, turns out to be the same in the U.S. as it is in the U.K., “I worry we could reach a staggering death toll by the summer and fall.”

Another variant, which originated in Southern California, has been spreading rapidly across the U.S., according to a study, although it’s not clear whether it’s more contagious or more dangerous. Many more may be here, too, according to one early review, though again, the significance of all these variants isn’t clear.

Double-masking: Protect yourself from COVID-19 variants

The two vaccines available, one by Pfizer-BioNTech and the other by Moderna, appear to be effective against these variants, said Hatziioannou, who published a study on the subject.

But these variants are likely to make targeted drugs such as monoclonal antibodies less effective. They will continue to change and eventually will evade vaccines and diagnostic tests if they keep spreading, she said.

Now is the time, she and others said, to double-down on precautions, to avoid a deadly fourth wave and finally bring the virus under control.

It’s difficult to predict what the virus will do over the next few months, said Samuel Scarpino, who conducts infectious disease forecasting at Northeastern University in Boston.

The variants make estimates more difficult, he said, as do the rising rate of vaccination, the relaxation of some COVID-19 public health measures, the lack of demographic information on who’s getting vaccinated and the limited genetic surveillance, which makes it harder to know exactly what the variants are doing.

“All those meet together to make it a very murky picture over the next few months,” he said.

Under the Biden administration, officials are increasing gene sequencing of virus samples tenfold, hoping to better track the variants.

In the short term, this awareness is likely to increase anxiety, prompting endless discussions about increases in variants and worries about what effect the changes might have.

More extensive sequencing should give the United States a better sense of where the variants are, how fast they spread and what to do about them, said Gigi Gronvall, a senior scholar and associate professor at the Johns Hopkins Bloomberg School of Public Health.

Viruses mutate as they reproduce within a person. Some mutations do nothing for the virus, and others lead to its demise.

A few improve the virus’s ability to reproduce and get rapidly passed through a population.

“This is what viruses do,” said Gronvall, an immunologist.

Public health officials predicted that but haven’t been able to convince leaders or the public to change the trajectory of the pandemic. “It is so disappointing because it didn’t have to be this way,” she said.

She and others said that if people give the virus an opportunity, it will take it.

Legislatures in North Dakota, Iowa and Wisconsin rolled back mask requirements. (Wisconsin’s governor reinstated them, but the legislature promised to remove them again when it meets next week.)

Gawande said people should wear medical-grade masks instead of often-ill-fitting homemade ones, and he criticized decisions by state legislators to lift requirements.

“The mask mandate is the last thing you remove, not the first when your hospitalizations go down,” he said.

“It’s just ridiculous,” Hatziioannou said about allowing restaurants to open for Valentine’s Day. COVID-19 cases spiked after every major holiday over the past year. Why would Valentine’s Day be any different, she asked.

Lifting the restrictions sends the signal that if it’s OK to eat at a restaurant, it must be OK to eat at grandma’s house, she said, but neither is safe.

Slightly easing regulations – allowing restaurants to be 40% full instead of 25% – won’t change the nation’s quality of life, Scarpino said.

A fourth wave would be far less likely, he said, if people get vaccinated when they become eligible and carefully follow public health measures such as mask-wearing and avoiding crowds.

What are all the new COVID-19 variants and how dangerous are they? Here’s everything you need to know.

“Then,” he said, “we can imagine a scenario in which this is all behind us.”

There’s a chance to end the outbreak in the U.S., Scarpino said, if people double-down.

If restrictions are lifted too early, the virus will bounce back. Vaccines offer a way out of that scenario but only if people take them and can get them in time to prevent a fourth wave, Scarpino and others said.

Thomas Balcezak, chief medical officer of Yale New Haven Health in Connecticut, views the virus like a forest fire and every tree/person as potential fuel for the flames. “Every time you vaccinate someone, you remove that potential fuel,” he said. “If you vaccinate enough people, you can create a fire break, where there just isn’t any more fuel for that fire.”

The faster the population is vaccinated, “the faster we can reduce the possibility of new strains emerging,” he said. “This has been a marathon, and now it’s kind of a race to the finish.”

Eric Topol, founder and director of the Scripps Research Translational Institute in California, said coping with the variants could be the last major challenge of the pandemic.

“If we get through this intact, we’re looking good, unless a new freak of nature comes up,” he said. “We’ve got this if we can get through this potential onslaught. But (the virus) needs to be fully respected.”

1/56 SLIDES© RION SANDERS,GREAT FALLS TRIBUNE via USA TODAY NETWORKSusan Geubtner, a nurse with Montana Veterans Affairs, gives a COVID-19 vaccination to Robert Harris a veteran of the U.S. Air Force on Feb. 9, 2021during a vaccination clinic for veterans in Great Falls, Mont.

This article originally appeared on USA TODAY: ‘It’s like we’re trying our best to help the virus’: A fourth wave is looming if US fails to contain COVID-19 variants, experts say

4 Tips to Make Adopting a Dog a Paws-itive Experience

Newspaper is your news, entertainment, music fashion website. We provide you with the latest breaking news and videos straight from the entertainment industry.
© Copyright 2017 - Newspaper WordPress Theme by TagDiv